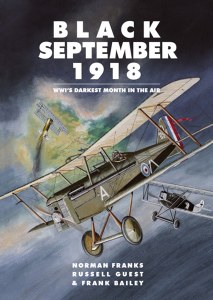 The follow-up to Bloody April 1917 continues fifteen months later into World War I. Much had happened over this period. More battles had been fought, won and lost on both sides, but now the American strength was feeding in to France with both men and material.

With the mighty push on the French/American Front at St Mihiel on 12 September and then along the Meuse-Argonne Front from the 26th, once more masses of men and aircraft were put into the air. They were opposed by no less a formidable German fighter force than had the squadrons in April 1917 although the numbers were not in their favour. Nevertheless, the German fighter pilots were able to inflict an even larger toll of British, French and American aircraft shot down, making this the worst month for the Allied flyers during the whole of World War I - and this just a mere six weeks from the war's bloody finale.

As with their previous book, the authors of Black September 1918 have analysed the daily events throughout September with the use of lists of casualties and claims from both sides. The book also contains seven detailed appendices examining the victory claims of all the air forces that fought during September 1918. Although it is difficult to pin-point exactly who was fighting who high above the trenches, by pouring over maps and carefully studying almost all the surviving records, the picture of `who got who' in the air slowly begins to emerge with deadly accuracy.

Coinciding with the centenary of the end of World War I, Black September 1918 is a profusely illustrated and essential reference piece to understanding one of the crucial months of war in the skies.