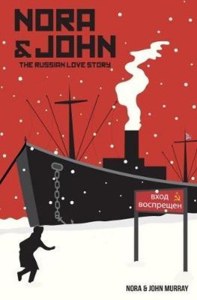 My mother Nora Murray (nee Korzhenko) escaped from Russia in 1942 with John Murray. She was the daughter of a high ranking KGB official based in Moscow's Foreign Office. My father worked as a cypher clerk for the British Government in their Moscow Embassy in 1939-42. She was sent to spy on him. They fell in love. And against all odds escaped to Britain in 1942 on the arctic convoys from Archangel.

Celebrated in England as the first Russian War Bride..my mother's book, 'I Spied for Stalin' was published in 1950 and translated into several languages. It tells the story of her life under Stalin's Russia. My mother's story was often celebrated in the national newspapers from 1947-1955. My father wrote his side of the story, 'A Spy Called Swallow', published in 1979.

The books were republished in 2017 with insightful accounts of their lives not previously mentioned, in a Prologue and Epilogue written by my brother Peter and I. They are republished as they were in 1950 and 1979, respectively. This further edition combining the two books under a single title 'Nora and John ' was also published.