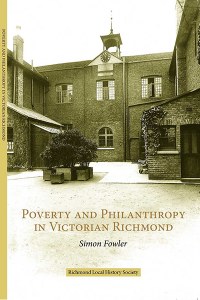 Prosperous as Richmond may seem, there have always been pockets of poverty. Poverty and Philanthropy in Victorian Richmond by Simon Fowler, published on 4 October 2017, looks at how ordinary people in difficulties were helped by the Poor Law and by the numerous charitable institutions in the town.

The book tells the story of Richmond’s workhouse, which was built by King George III in 1786, and the lives of the paupers who resided there. It also looks at the almshouses which have been helping small numbers of older people since 1600, and how charities tried to encourage habits of thrift and self-help among the working classes in the mid-19th century.

First published in 1991, this edition has been thoroughly revised with new sections on the relief of poverty locally in the eighteenth century and the slow arrival of the Welfare State.