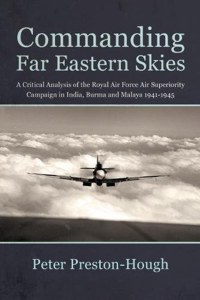 The war in the Far East between 1941 and 1945 is occasionally referred to as the 'Forgotten War' and this description extends to the way the campaign's air war has been analysed. However, the role of air power in Burma was vitally important to the campaign, in particular the attainment of air superiority in order to facilitate supply and close support operations. The foundation of these operations was dependent on the Allies achieving and maintaining air superiority and latterly air supremacy over the Japanese.

The British lost air superiority during the initial Japanese attacks as their early warning system, aircraft, aircrew and tactics did not match their adversary's capabilities. This book will analyse how the Allies lost air superiority during the initial exchanges, and then how technical and material difficulties were overcome before air superiority was won in 1944, and air supremacy was gained in 1945. Furthermore, the book will demonstrate how Japanese industry, their war in the Pacific, and their use of air power in Burma ultimately affected the air war's eventual outcome.

The book will examine current historiography to question and corroborate existing views, as well as to reveal new information not previously published.