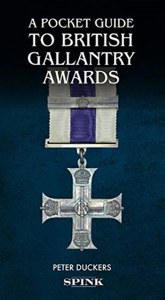 Over the ages and in all societies, gallantry in battle has been highly regarded, with the bravery of individuals and fighting forces being officially rewarded and publically recognised in a wide variety of ways, such as gifts of jewels or money, grants of land, promotions in rank or status etc. In Britain, it has been the practice since at least the mid-19C to award decorations - medals specifically conferred to reward bravery in action. With the growth of the British Empire in the late 19C, the waging of two World Wars, the campaigns that mark the end of Empire and a continuing UN and NATO role, Britain has produced a wide range of medals to reflect the gallantry of its own and Imperial fighting forces.

Such rewards have been conferred upon men and women, in all theatres of war and amongst the whole range of its forces on the ground, in and under the sea, in the air and even "at home". This new Spink book offers an introductory guide to British and Imperial medals for gallantry which have appeared since 1854 and which continue to be awarded to this day, illustrating the type of action which has led to the award of the various medals over nearly 200 years.