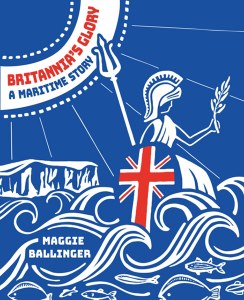 British fishermen, crusaders,Explorers, smugglers, traders,Inventors, convicts, settlers in the hold. Pirates, shipwrights, whalers,And our navies' trusted sailors:Presented here, in verse, their histories told. Since before Great Britain became an island, through the age when supremacy at sea established the largest empire the world has known, and moving right up to the present day, the nation's maritime history is told in a unique way, in this celebratory gift book - Britannia's Glory.

Written in memorable verse, with narrative side notes, quotations and a number of original drawings, it is designed to be easily digested and dipped into, (rather than swallowed whole). Offering comprehensive coverage, its topics include piracy, privateering, disappearing villages, smuggling, seaside resorts, the iniquitous slave trade and why the seas round our coast afford limitless potential for the production of renewable energy. The reader will discover elements such as wars, battles and (sometimes unconventional) naval tactics, alongside ship development, fishing, trade, ports, dockyards, lighthouses, maps and navigation.

There are tales of settlers, mutineers, heroic explorers and daring saboteurs, as well as ingenious inventors and other land-based folk earning their livings manufacturing rope or gutting herring. All contributed to a history that looks so very different when viewed from the sea. As a country, we may not know where we're going, but we certainly know where we've come from.