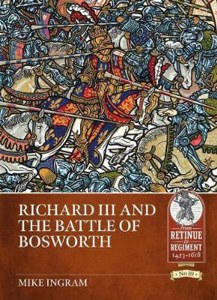 This is the story of two very different men, Richard III, the last Plantagenet King of England, and Henry Tudor and how they met in battle on 22 August 1485 at Bosworth Field. The Battle of Bosworth, along with Hastings and Naseby, is one of the most important battles in English history and, on the death of Richard, ushered in the age of the Tudors. This book, using contemporary sources, examines their early lives, the many plots against Richard, and the involvement of Henry's mother, Margaret Beaufort.

It also offers a new explanation for Richard's execution of William Hastings. Despite recent portrayals as the archetypal fence-sitters, the book also shows that the powerful Stanley family had a long standing feud with Richard and were not only complicit in the plots against him in the months before the battle, but probably laid the trap that ultimately led to his death on the battlefield. It shows that the events that climaxed at Bosworth were made possible by the intrigues of King Louis XI of France and shows that it was not just the fate of England that was at stake but that of France itself.

King Louis' taste for intrigue and double-dealing had earned him the nicknames "the Cunning" and "the Universal Spider." The book details how he spun webs of plots and conspiracies first against Edward IV then Richard III, destabilised England, and created a platform for Henry's invasion: policies that were continued by his daughter, Anne de Beaujeu, after Louis death. This was also a time of revolution in warfare, so the book examines English and European way of war at the time and how it affected the outcome at Bosworth. Then using the latest archaeology and contemporary sources it reconstructs the last hours of Richard III, where the battle took place, and how the battle unfolded using step by step maps and an order of battle for the day.

It finally looks at the aftermath of the battle and how Yorkist resistance to the new regime continued into the reign of Henry VIII.