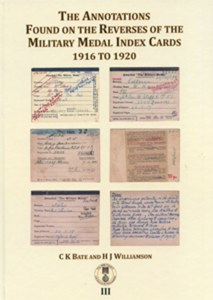 The annotations deal with the general administration of the awards of the Military Medal from 1916 to 1993. These annotations contain notes on:
Forfeitures and restorations of the MM. Notes on all MMs where replacements have been made. Notes on amendments to naming or repairs. Details about MMs lost and found. NOK details with home addresses and verifications for awards. Applications for information on MMs and verifications for awards Citations for awards. Those noted in italics, are from the cards themselves, those in normal typeface from other sources. Enquiries from NOK often with home addresses Applications for medal replacements or information from the Dominions Governments. Requests for gratuities. Name changes and aliases. Rank corrections. London Gazette dates for amendments,cancellations forfeiture etc. Details of MMs returned under King’s Regulations and Army Orders. Notes on “Special Gazettes” and “Special Awards”. Notes on MMs awarded in error. Details of medals scrapped. Applications for bars to MMs. Clarifications on regimental numbers Clarifications on unit MM won serving with. Requests for medal to be officially presented. Requests to trace awards and verify them. Soldiers home town noted in a numbers of cases.

This is from a limited run of 250 copies.