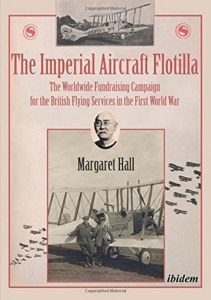 The Imperial Aircraft Flotilla : The Worldwide Fundraising Camapign for the British Flying Services in the First World War

A great wave of fundraising patriotic associations followed in the wake of Great Britains declaration of war on Germany on 4 August 1914, at home but also right across the empire. The most successful public campaign of all was launched in London at the beginning of 1915. Known as the Imperial Aircraft Flotilla, the scheme aimed to attract contributions towards aircraft production costs from throughout the British Empire.

Any country, locality, or community that provided sufficient funds for an entire aeroplane could have it named after them. It was promised that when the machine crashed or was shot down, the name would be transferred to a new one of the same type.Margaret Hall examines the Imperial Aircraft Flotilla as a facet of imperial history. She analyzes the fundraising efforts in Canada and Newfoundland; the Zanzibar Protectorate; Fiji, Mauritius, and the Caribbean; Hong Kong; the Malay states and Straits Settlements; West Africa, especially Gold Coast; Southern Rhodesia; Basutoland; Swaziland and the Union of South Africa; the Indian empire and Burma; (British subjects in) independent Abyssinia and Siam; in the Shanghai International Settlement, and the British community of Argentina; Australia; and New Zealand.

This remarkable and detailed book discusses the propaganda and counter-subversion usages of the Imperial Aircraft Flotilla -- and what the support for the imperial war effort reveals about contemporary national and regional identities and aspirations.

Death In The Air

Death Was Their CoPilot

DH9 From Ruin to Restoration

The Dawn of the Drones

The Royal Navy's Air Service in the Great War