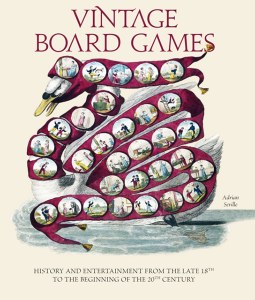 Vintage Board Games : History and Entertainment from the Late 18th to the Beginning of the 20th Century

The printed board game reached new heights of beauty and ingenuity during the nineteenth century. The century began with a golden age for upmarket board games, finely engraved and often with glowing hand-colour. But these expensive games faced competition from the new process of lithography and by the end of the century mass produced games from the steam-press were flooding a European-wide market.

There were games on almost every conceivable theme, whether on serious subjects like geography or history, or on the crazes of the moment. The games often relied on dice or a numbered spinning top called a teetotum, with no choice of move. Nowadays, the fascination of these games lies not in playing them but in seeing how they reflect the specific cultures of different times and places.

Other games were designed for gambling, with a winner scooping the pool. Some, though, were `mind games', where serious thought was required. This book presents examples of all these genres.

It is interesting to see how the focus of the games changed over the century - for example, how what had been largely a gambling game for adults became a children's game. However, games with a satirical focus, or a strong political message, were produced throughout the century and were definitely not for children. These games cleverly use pictures to convey their message, as do the many advertising games that began to appear towards the end of the century.