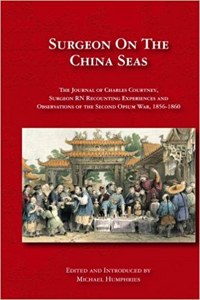 Surgeon on the China Seas : The Journal of Charles Courtney, Surgeon RN Recounting Experiences and Observations of the Second Opium War

Disease, accidents and battle injuries in foreign climes have been the lot of naval surgeons throughout history and fortunately many accounts of extraordinary experiences survive, having been meticulously recorded in journals. This is one such example, the journal of Naval Surgeon Charles Courtney who served in the China Squadron in the mid-nineteenth century. It is a unique and hitherto unpublished account of his travels and observations in a rapidly changing and dramatic era in Chinese history.

The original journal is in the form of a leather bound book written in longhand that documents visits to ports along the China coast from Canton to Shanghai and also describes a short visit to Japan to install the first ever British Consul to Hakodate. The journal is an eyewitness account of significant historical events including the Canton campaign during the Second Opium War and of the failed assault on the Taku forts in 1859. In this brief period Courtney operated on sailors with dreadful injuries under battle conditions as well as keeping the ship's crew in the best possible state of health, literally 'fighting fit'. In addition he was required to manage a wide variety of illnesses such as malaria, typhoid, dysentery, typhus and the ever present 'gleet' and 'pox'. Despite these onerous duties, Courtney found time to make regular entries to his journal which describe in detail the topography, medical environment, people and customs encountered along the coasts of China and Japan.

The journal also contains essays on opium smoking and foot binding and also a treatise on Chinese medical literature written together with renowned sinologist Alexander Wylie during Courtney's sojourn in Shanghai. This treatise is one of the earliest contributions by westerners to catalogue and acknowledge the contributions of Chinese medical scholars to our understanding of the medical sciences. Having been discovered by chance, the journal is a rich resource for those with an interest in Chinese, naval or medical history.