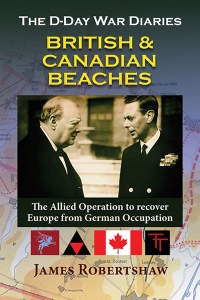 This is the consolidated book of the British and Canadian Beaches – Sword, Juno and Gold – with the 6th British Airborne under Major General “Windy” Gale protecting the Eastern Flank of the German beaches from German counter-attacks. The book has amalgamated four titles and show all the German units that manned the Atlantic Wall and the Allied units that were trained to overcome this massive fortification reinforced by Field Marshall Erwin Rommel. Major actions up until D-Day plus 8, with the first VC won on D-Day by CSM Hollis at Ver-sur-Mer, Major General Percy Hobart’s details of the 7th Armoured Division (Hobart’s Funnies), details of all the ships in the Eastern Task Force and RAF and RCAF operations, deceptions plans, Bletchley Park and the SOE (details are in a separate publication called ‘The French Resistance and the SOE’).