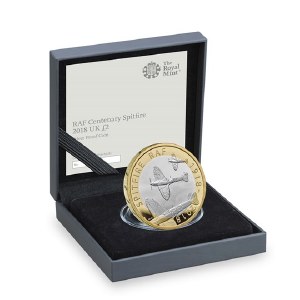 In 1918, The Royal Mint was striking the medals that paid tribute to the brave men and women of the Royal Air Force who played their part as the First World War drew to a close. 100 years later, as part of the RAF centenary celebrations the Mint produced five coins for a patriotic collection that will mark this important milestone.

This was the second coin in the series and it features the Spitfire and was the first time the aircraft had appeared on a United Kingdom coin.

This edition of the £2 coin has been struck in sterling silver. The coin’s reverse was created by brothers Richard and Neil Talbot and every detail of their design has been finished to Proof standard. The collection has been created in partnership with the RAF and the accompanying booklet includes specially sourced imagery and information on the famous plane.

Just 7,500 coins were struck in this Limited Edition Presentation

This item is non-discountable.