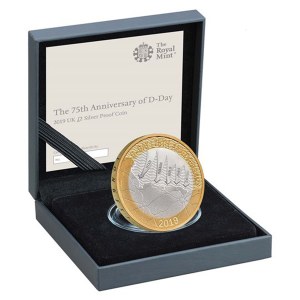 In order to defeat Germany, the Allies had to open a second front and relieve the pressure on the Soviet Union. Standing in their way was a series of vaunted defences known as the ‘Atlantic Wall’. 75 years after D-Day, the coin portrays the epic story of the largest amphibious assault in military history and pay tribute to the unflinching bravery of the men who stormed the Normandy beaches.

Taking his cue from military maps and landing craft markings, Royal Mint graphic designer Stephen Taylor captures the enormity of the undertaking on this commemorative £2 coin. Struck in fine silver and finished to finest Proof standard, this monumental story is exquisitely retold in miniature.

Just 5,000 coins are available in this Limited Edition Presentation commemorating the 75th Anniversary
Produced in collaboration with Imperial War Museums (IWM)
The only official UK coin to mark this anniversary
Issued as part of the 2019 Annual Sets
A limited-edition coin presented in a sleek black box